Hey guys, Kovalen ‘Destructor’ Ramalingam here, producer and lead programmer on Cross Reverie. This month has been quite hectic with the preparations for the campaigns as well as getting quite a bit done on the game with an engine upgrade and completing work on a main cast member. Also our editor ‘SweetK’ is preparing her return to the Université de Montréal and with her busy schedule, I’ll be taking over the dev blogs from now on and get to interact more with you cool people!

It’s coming down to having the videos ready but Cross Reverie should be making an appearance on Kickstarter next week. Be sure to stop by as every little bit helps in taking the Reverie to the next level of JRPG goodness and once again, thank you all who’ve been following the game’s development and sharing your thoughts along the way.

I ended up sneaking in the Unity 5 upgrade now, rather than later, which as expected ended up costing some time to get everything up to speed. But even though I’ve yet to really make the most out of the new features, the improved lighting fidelity seems to have been worth it. After all I want the graphics to be rich and colorful without being overly aggressive and it was a move in the right direction and while a dash of eye candy never hurts, I still strive for a well-rounded JRPG experience with some tight gameplay and storyline that will leave players wanting more.

It’s worth noting that the game’s framework was designed with customizability in mind, so I also intend to have quite a few options graphics-wise, for people who’d like to go all out on the color palettes, or gameplay-wise, like skipping the battle introductions(flashbacks to unskippable FF8 GF sequences) to allow players to customize the experience to their liking.

The man who aspires to become Xylera’s greatest swordsman, Spike has made his presence known and looks to become the best through cutting down the competition. Spike also marks the introduction of a reworked basic attack sequence for melee characters that aims at improving combat fluidity. Keep an eye out in the upcoming gameplay video. 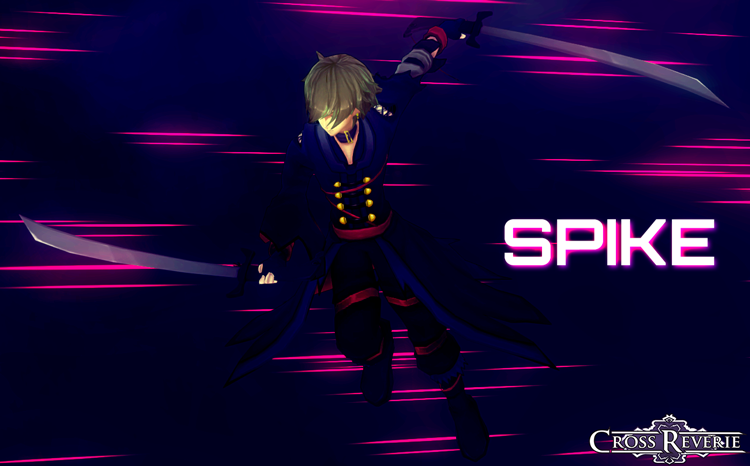 The show must go on

Cross Reverie will be seeing the light of day in one form or another, and thus production must continue! I’m very excited to start on the remaining members of the main cast which should be a major milestone next month. The outcome of the campaigns will affect our next move but we’ll most likely start working on the essentials for the Trial of Nightmare which would enable us to start assembling part of the story arches.

A few of the game’s soundtracks were revealed to showcase Cross Reverie’s OST repertoire outside of the prototypes most notably, the eerie opening theme, The Eternal Dream and a playful NPC theme, the Hour of Mischief.

Lotsa exciting things to come with the campaigns so be sure to join us next week for the Kickstarter as well as Steam Greenlight. Spreading the word is always appreciated and if you have any questions, do not hesitate to get in touch. See you people on the other side, Destructor out.