What is up guys? We’re nearing the 20% mark which is quite nice seeing how some of our high profile contacts are still getting ready to do their press action on the game. Thanks again to everyone who’s been spreading the word and helping us get closer to a better Reverie!

And as promised, the backer-exclusive bling in the form of the highly stylish and transparent, phantom weapon skins: Now you get to conquer the nightmare in style! The skin is purely aesthetic for the 8 main characters and available to all backers. 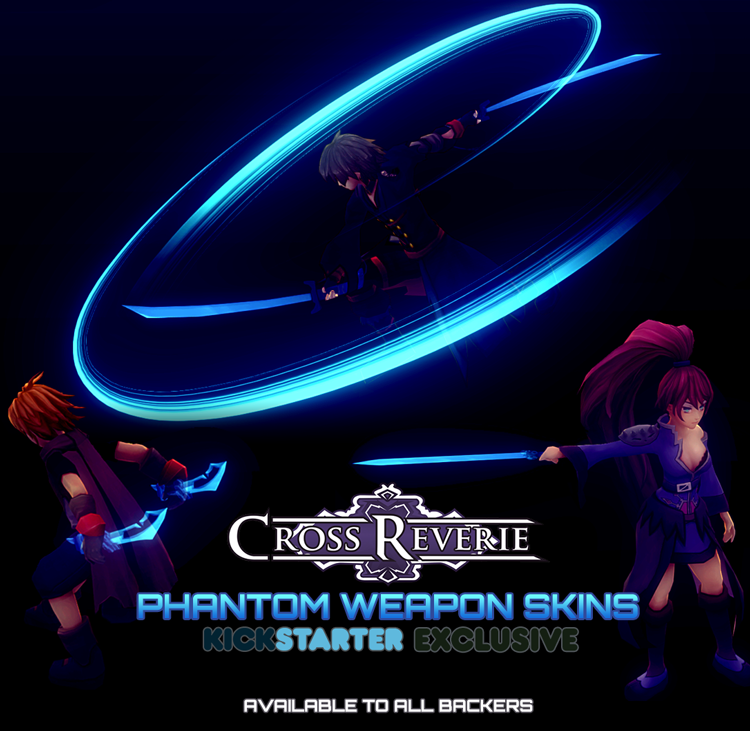 We’ve updated the FAQ with some of the more popular questions we received, including:

Are these the final artworks for the game?

Most of our artworks were created early during the game’s conception nearly two years ago. As Cross Reverie has greatly evolved since then, there’s certainly room for improvement but making a JRPG is one heck of a hungry beast and our core budget has more important things to focus on at this time. A complete overhaul is always a possibility in the future to match the game’s current vision.

What languages will the game be available in?

The game will be first released in English and as french-speakers, we’ll start working on the French version ourselves(les français sont bienvenus!). Following that, we’ll be looking into the more popular choices such as Spanish or German which will depend on our budget to hire localization teams.

Past few days have been quite an amazing experience for one lowly software engineer and his sister who put it all on the line to accomplish their dream of a kickass JRPG. While more sane people would probably go paying off their mortgages or opening up a full-fledged IT firm, we decided to invest in our passion and the idea of one heck of a JRPG experience for all fans of the genre.

It’s worth mentioning that we’ve been doing amazing on Greenlight which will be a big incentive to push out the PC version if anything, but we’re still very optimistic in taking the Reverie to the next level and possibly consoles, thanks to you equally dedicated and passionate people who put their faith in us! Oh and we’ll be putting out the new video next week, stay tuned for some more JRPG goodness!